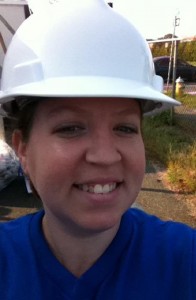 This year Extreme Makeover Home Edition came to my home state of Massachusetts. They were rebuilding a house in Springfield, MA which is about an hour and a half from me. I found out about it through Facebook when other friends from that part of the state posted about it. Of course I was excited about it being the TV show but I wanted to find out about the family they chose. 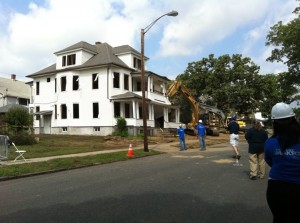 I found out they chose the Walker Family. This family lost their 11 year old son, Charles Walker-Hoover when he hung himself on their 3rd floor because he was being bullied. The family would never go on their 3rd floor after that. Some of them slept in the living room and kept their clothes and belongings in plastic bins just so they didn’t have to go up there.

I knew I wanted to get involved in this project because I was also bullied as a child and have had many years of effect from that. I can’t imagine being bullied in the way kids are being bullied nowadays in school, through texting and social networking sites. They can’t get away from it.

Mrs. Walker has turned her son committing suicide into an Anti-bullying movement. She travels around to meet with State Representatives to try and get anti-bullying laws passed and to raise awareness. 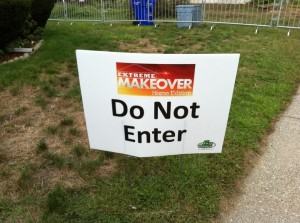 Once I knew I wanted to get involved I went on the Extreme Makeover website and found a link to sign up to volunteer for the Springfield, MA build. I was able to choose the time I could volunteer for. I got a confirmation soon after and was excited for the day to come. It was pretty easy to volunteer! No screening or interview process was involved.

I volunteered for Day 2 of the build which was on a Monday. I woke up at 5am so I could get there in time for my 8am-2pm shift. Once I arrived I had to sign a release and they gave me a show T-shirt to wear. Then we were just told to wait until we were needed. Luckily I only waited about an hour and they called a handful of us to go on site. We each got a construction hat and headed to the house.

When I arrived at the site, the old house was still standing but it was gutted out. I didn’t realize how emotional I would get when I looked up at the 3rd floor. It took my breath away and I had to hold back the tears. I cant imagine having to live in that house.

We then found out we would be a part of the taping! I got to stand right next to Ty Pennington and the 3 designers that were there for a little while. Once taping started we had to take wood and windows in and out of the house to look busy while Ty and company taped a segment where teens were spray painting bullying words on the side of the house. After that taping was done we were able to stand and watch them tape another segment where teens were holding bullying word signs and then some stood up with the letters spelling out STAND TOGETHER!!

After the taping, myself and a few other volunteers helped return wood, then we helped serve lunch to all the staff and volunteers. A couple other things I helped with was to grab a banner for a staff member and then a few of us sat for a while and ripped off labels off water bottles since they couldn’t advertise products that weren’t sponsors. In between some of the tasks we got to see them start to tear down the Walkers house.

At the end of my time volunteering I had met some new lifelong friends, had a fun and exciting time and learned a lot more about what we can do about bullying.

Here’s how you can help. You can watch the episode when it airs to find out more. It will air Friday December 2nd at 8pm on ABC. To help the specific family you can support the Carl Walker Foundation by going to http://carljoseph11.org.

You can (and should!) also go to www.standtogether.tv where you can print out a number. They want to reach 1 million people who will stand together against bullying. I was number 336 . What number are you?

Stephanie Doyle is 30 yrs old and lives in Burlington Ma with her husband of 4 years (they have been together since they were 13). She has been a nanny for over 7 years and worked in the daycare setting for 7 years before becoming a nanny. Stephanie loves  working with newborns and has a lot of experience with newborns through preschool age children. She is very active in her church and does a lot of volunteer work within the Children’s Ministry there. Stephanie currently works with awonderful family in Arlington MA caring for a 21 month old boy and a 3 month old girl.
If you know a nanny who is “giving back” we would love to feature them on an upcoming Thursday Table Talk.
Email the information to: regardingnannies(at)gmail(dot)com

4 thoughts on “Nannies Giving Back”