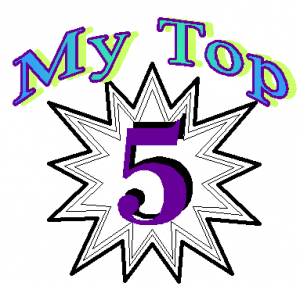 Today we are featuring Jan St. Clair on “My Top 5”

1)  My tooth broke, it was terribly painful, and I needed a root canal in several spaced-out appointments.  Even getting the novocaine shot each time was excruciating, and the shot did not completely deaden the inflamed nerves during the procedures, either.   I was a wreck day and night until it was all over, enduring the pain I was in and anticipating the greater pain of the next procedure.  What allowed me to make it through was my toddler nannykids, boy-girl twins.   My bosses had offered me time off, but I needed to stay on the job.   When I was with my kids, they pulled me immediately out of my dark inward focus.   They needed me fully present and connected with them, and the nurturer in me roared to the fore when I was with them.   Being with them was the only “rest” I had from the fear, and the pain was also deadened when I was focussed on them.

2) My mother had a stroke, and died soon after, without gaining consciousness.   The day after the funeral, I begged to come back to work.   And my kids then were under 1 and just 2, also very much in need of our connection as well as my full attention.   When I was with them, I was pulled back out of the strange floaty state of unreality and back into life.

3-4) Two years later, my father also died, following a period of dementia: this was my dad, who was always as sharp as a tack, and so fiercely independent and in charge.  My sister and I managed his care between us, each able to do different things that the other couldn’t.   Thank goodness for her.   And for my nannykids, who kept me going day after day during this long period of living loss, and after he finally passed on.

5) I arrived at work on 9/11, and my boss gave me the kids to get them out of the house…she was on the phone with her mother who lives in NY, and who during their conversation had just seen the plane hit the first tower from her balcony and who was hysterical.   We thought it was pilot error, but it was still horrible, and it was where my boss had grown up.   I took the 3 year old for a haircut with the 3 mo in the carrier, and we found out there that the second tower had been hit, but we still didn’t know all the implications.   We went to our peaceful pond place and fed the ducks. Later, we went home and the mom filled me in, and left to be by herself.   The world had done a 180.
The 3yo napped, and I just sat and held the 3 mo old while he slept…and he reminded me moment after moment after moment after moment, that regardless of this horror and the fear that worse will happen, we are alive and the important things continue.When the 3 year old woke up, I continued holding the baby, and the 3 year old immediately started imaginary play that I had to take part in (gladly), with me being the short-order cook for the imaginary hospital doctors from her brother’s birth, whom she had invited to dinner and she was taking their food orders (mostly macaroni and cheese, with milk or juice).   They got me through the shock.
My kids just kept reminding that day, and days afterward, that we are still alive and we love, and we continue.

Janice St. Clair is a Career Nanny. She is the Founder and Facilitator of Boston Area Nanny Support Group (BANSG)An independent group of nannies helping each other, since 2000
http://BANSG.info

She is also a member ofof MAPN (Massachusetts Alliance of Professional Nannies)http://www.mapnannies.com

Jan shares her gentle wisdom with many nannies in real life and online and we are fortunate to have someone of her caliber we can consider a colleague and friend.

2 thoughts on “Top 5: Worst Situations My Nanny Kids Have Helped Me Through”