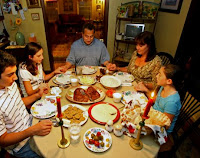 Photo of the Al-Zaim family gathered for dinner to break the Ramadan fast. Adult Muslims are required to fast during daylight hours this month as a form of worship. (Justine Hunt/Globe Staff Boston.com)

Nannies: Would You Work for a Family of a Different Faith?

I am a Christian who has been working as a nanny for a Muslim family with a six-year-old boy and twin infant boys for more than three years. I have been hired to help care for the boys as the mother volunteers for charity and the father works as a surgeon.

At at time when scared American citizens are protesting the building of a mosque in Manhattan, and since Ramadan begins at sundown tonight, I feel there is no better time to let other nannies know about my experience working with, and falling in love with, a Muslim family in America.

5 thoughts on “Table Talk Thursday:Celebrating Ramadan As A Christian Nanny”