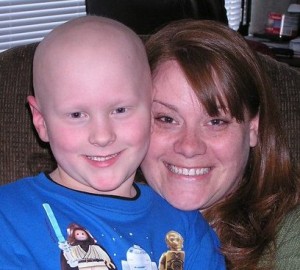 We love to spotlight nannies giving back to their community. Today we shine the spotlight on the Michigan Professional Nanny Association

Ryan is the former charge of Tara Lindsay.

In August, 2010, Ryan was a happy, healthy, active six year old boy.  When he started complaining of specific aches and pains, his concerned parents sought medical attention.  They never imagined the journey they were about to embark upon.  Shortly after entering the hospital that month, Ryan was diagnosed with a non-Hodgkin’s Lymphoma called Burkitt’s Lymphoma.  He had multiple tumors, some of which caused him excruciating pain and severely limited his physical capabilities.  Ryan immediately began receiving aggressive chemotherapy to get rid of the cancer.  He has spent more days in the hospital than at home. Now age 7, Ryan has been a true superhero and is WINNING.  He continues to receive regular inpatient chemo treatments.

Ryan’s former nanny is Tara Lindsay, MPNA co-founder and co-director.  Because of this close association, MPNA has chosen to help Ryan’s family via Ryan’s Superhero Bowling Fundraiser in order to help cover the costs of Ryan’s care which are not covered by insurance.

If you know Tara, either via the internet or in real life you know that she is extremely passionate and committed to anything she does. I asked her to tell me a little about her relationship with Ryan and how he came to be a part of her life.

Here is her story:

I first met Ryan’s mom, Kristen, when a former charge was in her preschool class. We hit it off pretty well. I was with that charge for 3 years and then went to Honduras. When I came back, that family wanted me to work for them but could not offer me the full time job I needed.

Kristen had Ryan in November, 2003. The other mom had a brainstorm, since both of her children attended Kristen’s school. She called Kristen and offered to pay the bulk of my salary in a nanny share sort of position. I would watch the newborn Ryan during the school day, take him with me to pick up the other two children and leave him at the school with his mom. It was an ideal situation for all of us to get both families through the end of the school year. Ryan’s parents were dream employers…truly appreciative of the care their baby was receiving great communicators. Even Kristen’s mom saw fit to send me a few notes of thanks and appreciation. We stayed in touch simply because we liked each other. It was easier a few years later when I again had a charge in Kristen’s classroom, this time with Ryan as a classmate. When I didn’t have anywhere to go for Thanksgiving that year, they invited me to join them and their extended family for the holiday.

Email and facebook help us to stay in touch, too. When Ryan first got sick last August, Kristen kept me posted via text message and emails…I still have the one she sent about his diagnosis. None of us could believe it, that this healthy active boy had such an aggressive cancer inside of him!

As nannies, we are so used to having the answers and solutions, so used to knowing what to do, so used to being able to fix things for our babies…we can cuddle them through fevers, practice endlessly with them while they master a new skill, give them popsicles for sore throats, comfort them through broken hearts, teach them how to stare down a bully, put a bandaid on a scraped knee…but a nanny can’t fix cancer. I felt completely helpless, but I needed to do something to help. I found small ways…being available for Kristen and Bob, e babysitting, finding activities Ryan could do from bed. (For much of his illness, Ryan was unable to walk. His primary tumor was situated in a way that destroyed nerve endings and sensations in his lower body (except for the nerve pain it created). He also lost the ability to feel when he needs to go to the bathroom. He can walk again now, with braces on his legs, but gets very frustrated with ongoing balance issues and the incontinence issues that still remain).

My current charges drew pictures and cards for Ryan, but playing together was not really an option because chemo left Ryan with almost no immune system, and being around other kids could expose him to too many germs that might not make us sick but that would land him in the hospital again. (I’m happy to report that he’s better now…and is coming over for a playdate this week!)

Anyway…I was feeling so helpless and needing to do something… And we had a board meeting for Michigan Professional Nanny Association. I told my fellow directors April and Maria about Ryan’s diagnosis and the very first words out of Maria’s mouth were, “We’ll do a fundraiser for them, right? It’ll be awesome!” And there it was…a real way to help Ryan’s family. Insurance covered the direct cancer treatment, but does not cover all the expenses associated with Ryan’s care and ongoing treatments for the damage caused by his tumors.

I can’t even begin to express, how amazingly supportive my fellow nannies have been through this, especially the nannies in our Michigan Professional Nanny Association group. Maria really took this fundraiser to heart from the beginning and has put together a really fabulous event, pulled in all sorts of volunteers, and April has kept everything organized and accounted for. And you know, they have done all of this work and put in all these hours…and they have yet to get to meet Ryan in person. That’s phenomenal on their part. There is no way I could have done this. Several of the nannies are volunteering with us on the day of the fundraiser. Another nanny in the group also knew Kristen from having had charges in Kristen’s class…and she and I have cajoled Kristen into coming out to dinner with us several times so she got some away-from-the-hospital time. Several nanny friends from around the country have sent and offered to send donations for the raffle and/or directly to the family. I think that speaks to two things: First, that most nannies are, by nature, compassionate and generous souls. Second, that nannies *get it* with each other…we know what it is like to be willing to lay your life down for someone else’s children, and so we know how deep that desire is to “make it all better” for them, and that compels us to reach out in support of one another when someone has a charge in crisis. It has been truly humbling to witness this.

If you live in the area and want to participate, here is the link to the Ryan Rocks Information Page

If you want to make a donation:

2 thoughts on “Ryan Rocks! and so does the Michigan Professional Nanny Association”