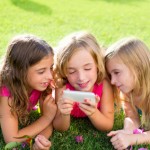 We’ve all seen them—the toddlers at the park who are sitting on a bench glued to their tablets rather than playing in the sandbox, or the preschoolers who are gazing at their mom’s smartphone with incredible intensity.

While we might marvel at how adept these young kiddos are at using the latest technological gadgets, we also might wonder if it’s better to wait until they are older to introduce them to these devices.

Technology Use in Toddlers Is on the Rise

The American Academy of Pediatrics is holding firm in their recommendation that kids under the age of 2 not get any screen time at all. Although some busy parents might not agree with this idea—after all, a toddler who is happily occupied on a tablet will give them the chance to make that important business call in peace—it’s still something to think about.

Regardless of whether it is inherently good or bad, it’s definitely becoming more common, notes Common Sense Media. The number of little ones under the age of 2 who use some type of technology on a regular basis has gone up from 10 percent in 2011 to 38 percent in 2013.

When to Start Introducing Technological Gadgets

Although there are no hard and set rules as to when kids should be allowed to start using electronic devices, there are some general guidelines that parents should think about.

For example, as Real Simple notes, school-aged children who are taking the bus or walking home from school may want to have a basic cell phone that they can use in an emergency. Then, as they grow older, you can consider upgrading them to a phone with more bells and whistles like the durable and self-healing LG G Flex.

One advantage of new technology is that many devices allow you to control how many minutes a day they can be used and for what activities. Young kids are better off having real interaction with parents, siblings and friends, so you can set a limit on the amount of time spent playing games versus reading an e-book versus being shut down entirely. Then, when they do get some screen time, try to find apps and games that will allow them to share what they are doing and ideally learn something in the process.

Give Kids Chances to Be Mindful

As Huffington Post notes, one of the best ways to raise kids in our digital world is to give them plenty of opportunities to unplug their devices and tune in to the world around them.

Set family rules as to how much time your kids can spend each day sitting in front of a screen, and then enforce it. For example, establish a no tablets or phones at the dinner table rule, and spend the time talking to each other instead. Another limit could be establishing a tech free day once a week where everyone gets a break from their screens. Or even better, instead of sitting down with your toddler to play a game on your smartphone, put the phone away and bring out a pile of tactile or educational toys like books, crayons or Legos, and spend time reading, talking and playing.