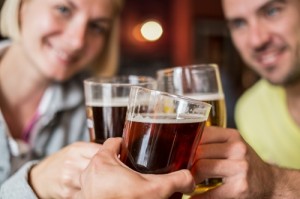 It may feel like a slog when you work for the weekend, but when you have a chance to get out and about, you need to make the most of it. While you may currently stick with the same old bars, beers and food, you want to be more adventurous in the future. The following delicious and unexpected delights are just a few awesome meals and drinks you should try next time you have a night off.

Drinking beer is a constant search for new, unique flavors, textures and aromas. Different styles of beers are desirable at different times of the year. For example, a dark, heavy porter doesn’t sit well in the summertime, but a porter like the Victory at Sea by Ballast Point Brewing might be just what you need on a cold winter day. This beer is infused with Caffe Calabria coffee from San Diego and a splash of vanilla extract, both of which mask the 10 percent ABV and make this a tasty brew.

In the spring, you should try something a bit more floral and flavorful to complement the warming weather. But, don’t leave the creamy smoothness of the wintry brews behind — not quite yet, anyway. Guinness developed a new Nitro IPA, which combines the floral flavors and aromas of an IPA with the smoothness of the classic Guinness Stout.

Once summer rolls around, it’s time for a crisp refresher. A light, wheat beer like the Marble Brewery Wilderflower Wheat goes great with a slice of orange or lemon. This beer is made with honey from New Mexico and is a light brew for hot summer days.

Metropolitan areas have a lot of culinary options, so don’t miss out on world-class dishes or the opportunity to make your own. If you’re a meat lover, for instance, it’s time you treat yourself to some famous asado beef from Argentina. Asado is a traditional Argentine technique in which beef is cooked over a wood fire barbecue with a collection of fine herbs. Argentine chefs spend years perfecting their craft, so look for a quality asado restaurant. If you can’t find one in your area, The Real Argentina has some great insights on how you can cook this delicious meal yourself.

If you’re with friends, dim sum is the perfect food for a group. Dim sum is a traditional Cantonese meal that is served in bite-sized portions. Small dumplings are some of the main dishes served, and they are typically packed with shrimp, pork, veggies and rice. There also are trays of Chinese vegetables, such as bok choy (a Chinese cabbage), soups and desserts.

Soto, from Indonesia, is an inexpensive soup that showcases a variety of foods, such as meat, veggies, noodles and an egg on top. While Indonesian cuisine differs by the region and city, Soto can be found in nearly all the sub-cultures and regions. Soto is usually served with rice, which makes it filling and delicious at a reasonable price.

9 thoughts on “Awesome Meals and Drinks for Your Night Off”