Every year a new group of children start the journey through their years of education. 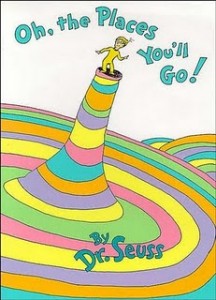 Today I wanted to share 2 ideas for something you can do to help create long term memories.

The first features the Dr. Seuss Book “Oh the Place’s You’ll Go!” and you can find the specifics on
Lisa’s Workshop.

The second is printable signs for each school year so that when you look back, you don’t have to say “Now, was that First or Second Grade?”
Even if your kids are back in school it’s not too late to use either of these 2 great ideas or even print out your signs for next year!

So if you jump over to How Does She and sign up for her free printables you can print out your signs ahead of time!

Finally I wanted to share with you one of my favorite writings about sending your little ones off to school. ..better get a tissue before you read this writing by Abraham Lincoln.

“World, take my son by the hand—he starts school today!

It’s all going to be strange and new to him for a while, and I wish you would sort of treat him gently.

You see, up to now, he’s been the king of the roost.

He’s been the boss of the backyard.

But now things are going to be different. This morning he’s going to walk down the front steps, wave his hand, and start on a great adventure that probably will include wars and tragedy and sorrow.

To live in this world will require faith and love and courage.

So, World, I wish you would sort of take him by his young hand and teach him the things he will have to know.

Teach him—but gently if you can.

Let him learn early that the bullies are the easiest people to lick.

Teach him the wonders of books.

Give him quiet time to ponder the eternal majesty of birds in the sky, bees in the sun, and flowers on a green hill.

Teach him that it is far more honorable to fail than to cheat.

Teach him to have faith in his own ideas, even if everyone tells him they are wrong.

Try to give my son the strength not to follow the crowd when everyone else is getting on the bandwagon.

Teach him to listen to all men, but to filter all he hears on a screen of truth and to take only the good that comes through.

Teach him to sell his brawn and brains to the highest bidders but never to put a price tag on his heart and soul.

Teach him to close his ears on a howling mob—and to stand and fight if he thinks he’s right.

Teach him gently, World, but don’t coddle him, because only the test of fire makes fine steel.

That’s a big order, World, but see what you can do.

He’s such a nice little fellow.”